A visit to Rockland Maine is not complete without exploring its numerous historic and highly photographed lighthouses. And the Rockland breakwater and Rockland Breakwater Lighthouse top the list of must-visit Maine lighthouses in the MidCoast region. The unique breakwater and lighthouse are vitally important for the town and not quite like any other navigational structure in the state. 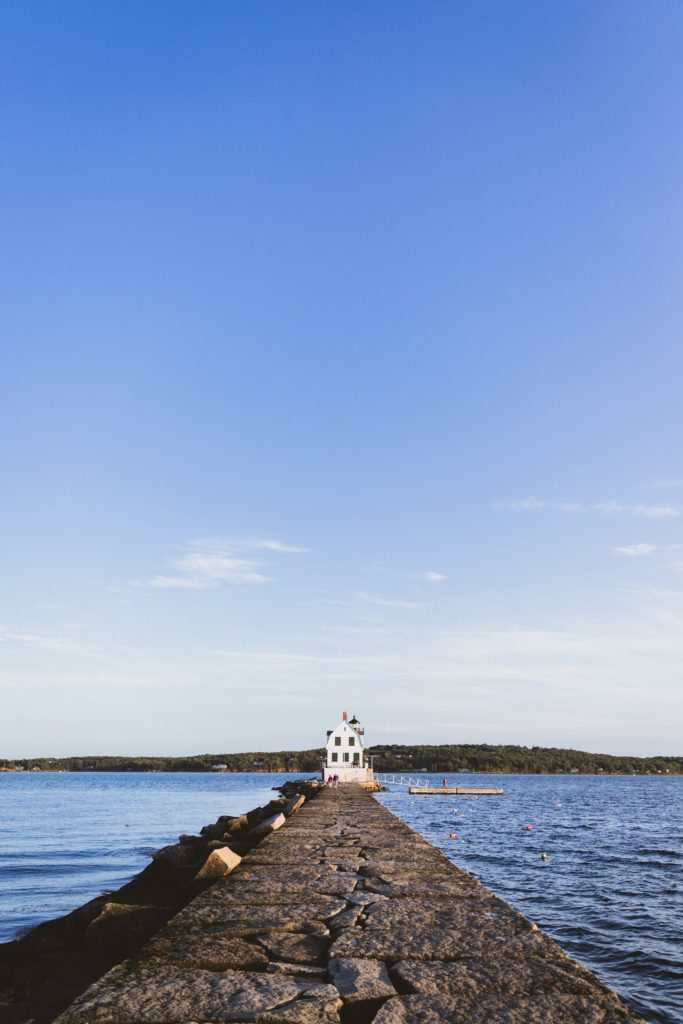 Fascinating Facts & FAQs About the Rockland Breakwater and Lighthouse

Q: Can you walk the Rockland Breakwater?

Yes! As long as weather conditions are safe to do so, you may walk the Rockland Breakwater. In fact, visitors can tour the attached keeper’s house (which has been restored) and climb to the top of the lighthouse for a panoramic view of Rockland Harbor.

Q: How long is the Rockland ME breakwater?

Q: Where do you park for Rockland Breakwater Lighthouse?

Parking for the Rockland Breakwater Lighthouse can be accessed off Samoset Rd in Rockland. From Glen Cove (north), take US Route 1 to Warrenton St (which becomes Waldo Avenue), head east (left) then turn left onto Samoset Road. From Rockland (south), take US Route 1 to Waldo Avenue, head east (right) then turn right onto Samoset Road. The road ends in a small parking lot designated for visitors to the lighthouse and the 7/8-mile long breakwater.

Q: How long is the Rockland Harbor Trail?

Q: Why was the Rockland Breakwater built?

After several large storms in the 1850s caused extreme damage to Rockland Harbor, construction was started on Rockland Breakwater to create a safe harbor for it to be a commercial port and working harbor. The structure was built with 732,277 tons of granite.

Q: How wide is the Rockland Breakwater?

The Rockland Breakwater is approximately 43 feet (13 meters) wide across the visible top, and 175 feet (53 meters) of granite blocks across underwater.

Q: How long did it take to build the Rockland Breakwater?

The Rockport Breakwater took 18 years to finish. On November 24, 1899, the project was finished.

Q: When was the Rockland Maine breakwater built?

The Rockport Breakwater was built in the late 1800s and was finished on November 24, 1899. 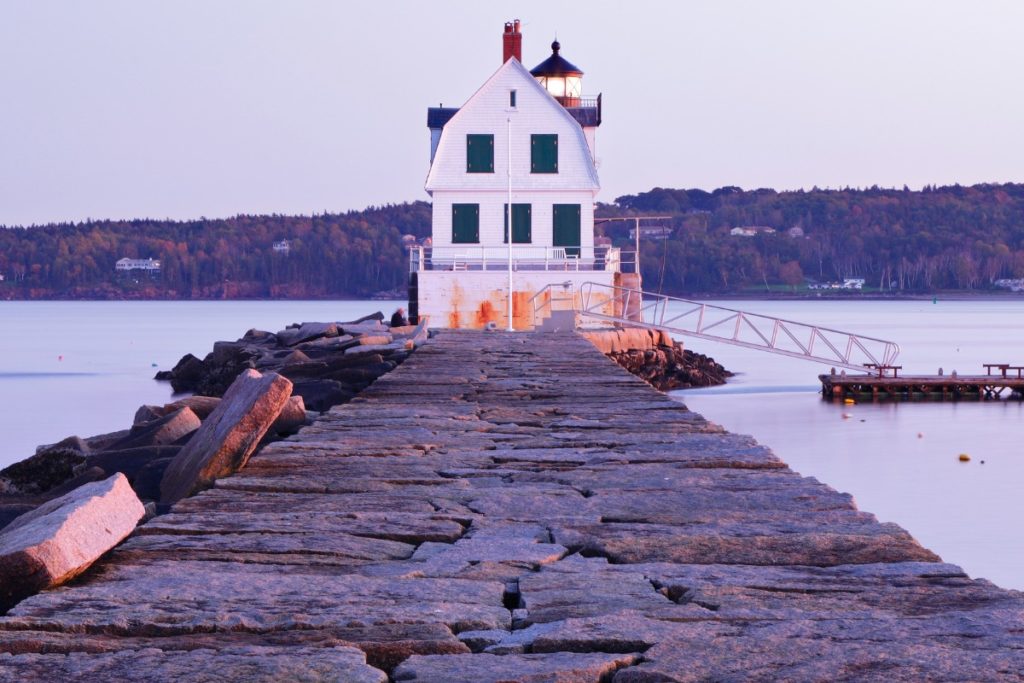 You can get a closer look at this historic breakwater and lighthouse. As volunteers are available, the Friends of Rockland Harbor Lights opens the tower for tours. There’s no fee for touring the lighthouse, but you can make a donation to contribute to the restoration and preservation efforts.

From the Rockland breakwater parking lot on Samoset Road, follow the trail across the breakwater to the lighthouse. Extending 4,346 feet into Rockland Harbor, the breakwater itself is 0.8 miles long, so it takes about 15 minutes to cross it.

When you reach the lighthouse, you can walk through the keeper’s house and climb the lighthouse as long as volunteers are on-site.

From the top of the tower, you get a bird’s-eye view of the harbor, the many historic schooner and lobster boats at work, and Penobscot Bay. It’s possible that you’ll see an array of wildlife as well — such as seals, shorebirds, and dolphins.

If you bring children to tour the Rockland Breakwater Lighthouse, they need to be taller than 42 inches. It can be chilly on the breakwater and at the tower. You can expect stronger winds and lower temperatures, so wear layers or take a jacket.

Also, the granite breakwater can be slippery and uneven in some spots, so don’t let your children run around. You should wear comfortable, appropriate footwear with solid soles. You’ll be happy that you aren’t wearing flip-flops or heels when it’s time to climb the seven-rung ladder to the lantern room.

The lighthouse doesn’t have public restrooms. During the summer months, though, portable restrooms are available adjacent to the parking lot. The breakwater and lighthouse are pet friendly, too — just keep your pet on a leash. In addition to other visitors and pets, you’re likely to see fishermen casting lines from the breakwater.

No bathrooms available. Dog friendly. Plastic poop bags available at park entrance. This place is not wheelchair or walker friendly. There was plenty of parking, although the area was in rough shape and our low riding car couldn’t park on the slope without hitting.

The walk is long and beautiful. Be careful on the granite, it is uneven, had big gaps, and is slippery in spots. It was still doable in sandals. We saw a grey seal and cormorants while walking to the lighthouse. Keep your eyes open for wildlife.

Many people were tidepooling at the beginning of the walk since it was low tide. There were many people fishing. At the last dock before the lighthouse, there was a family jumping off and swimming. I’m not sure if that’s actually allowed or not. No lifeguards around. There’s a picnic table next to the flagpole right in front of the lighthouse, but any of the large rocks make a great spot for a picnic. Beware of seagulls if you do bring goodies.

Makes sure to walk around the lighthouse and up the stairs. 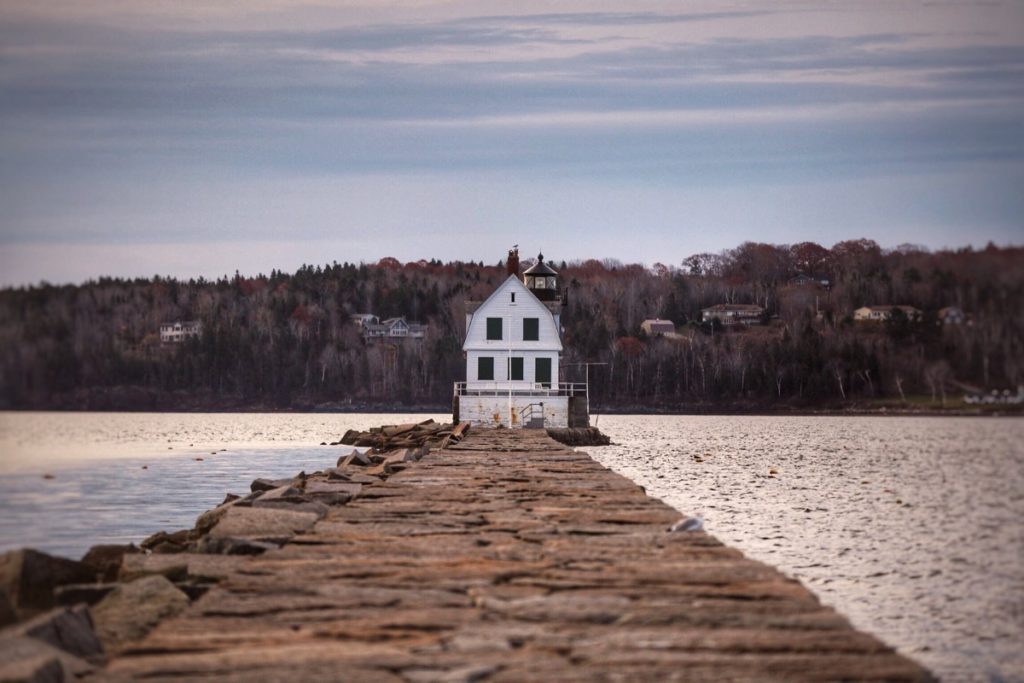 A Background of Rockland Maine

At first sight, you might think that the breakwater is a causeway and that it was built to access the lighthouse. However, there’s much more to the story.

For about 200 years, Mid-Coast Maine thrived on limestone and other industries. The stone was quarried, heated in kilns, and converted into lime that was used in construction. Known as East Thomaston at the time, Rockland was renamed in the mid-1800s and had 80 waterfront limekilns. Rockland Harbor acted as a refuge for vessels during rough seas and storms.

In 1827, the town of Rockland added a small light to the north entrance of Rockland Harbor (aka Jameson Point) to aid local ships in navigating the harbor. Mason Jeremiah Berry attempted to build a small wall across part of the harbor in 1832. Originally, he was going to build a second wall, but that never happened.

Two low-pressure systems caused considerable damage to the businesses, ships, and waterfront in Rockland in the 1850s. Lime manufacturers would also lose materials when storms sent water into their kiln sheds. Clearly, there wouldn’t have been as much damage if there was a more substantial solution in place, but that was delayed because of high costs. 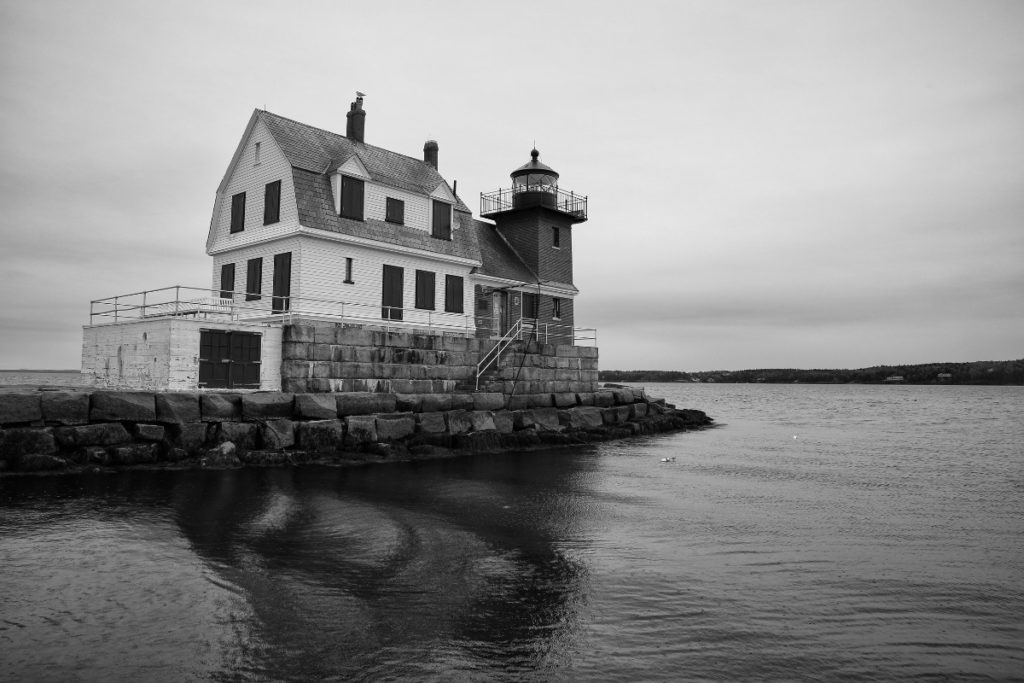 It took until 1880 for Congress to approve the breakwater construction, and that only happened after a local Senator intervened and the citizens signed a petition. Initially, the construction plan was for two breakwaters — one on each side of the entrance to Rockland Harbor — at an estimated cost of $500,000. However, discussions about switching from the construction of 1,900-foot and 2,640-foot breakwaters to building a single, long breakwater started in 1886 and was approved in 1890.

The actual construction of the single Rockland breakwater, which extends 4,346 feet into the harbor, took about nine years. It was completed on Nov. 24, 1899. Built in nine sections, the breakwater is shaped like a trapezoid with a 175-foot-wide base and 45-foot-wide topside. At 70 feet deep, the structure required nearly 700,000 tons of granite and cost about $750,000.

The following winter, it was determined that the breakwater needed to be raised for severe storms. On Oct. 15, 1901, a 4-foot cap was completed along with a base for a lighthouse at the end of the breakwater. By the end, the entire project required 768,774 tons of granite, much of which was mined in Vinalhaven, and cost about $880,000.

During the breakwater construction, the small portable light erected at the south end was moved four times. Between 1900 and 1902, the permanent Rockland Breakwater Lighthouse that you see today was erected. The 25-foot tower was constructed with brick and wood.

A keeper’s house was attached to the tower, and the first official keeper was Howard P. Robbins in June 1902. That November, Clifford M. Robbins (his son) was appointed as the assistant keeper. In the 1940s and ’50s, the Coast Guard occupied the keeper’s house for several years but vacated it in 1963. After WWII, the U.S. Coast Guard started a program to automate lighthouses and remove keepers. By 1965, the light was fully automated. 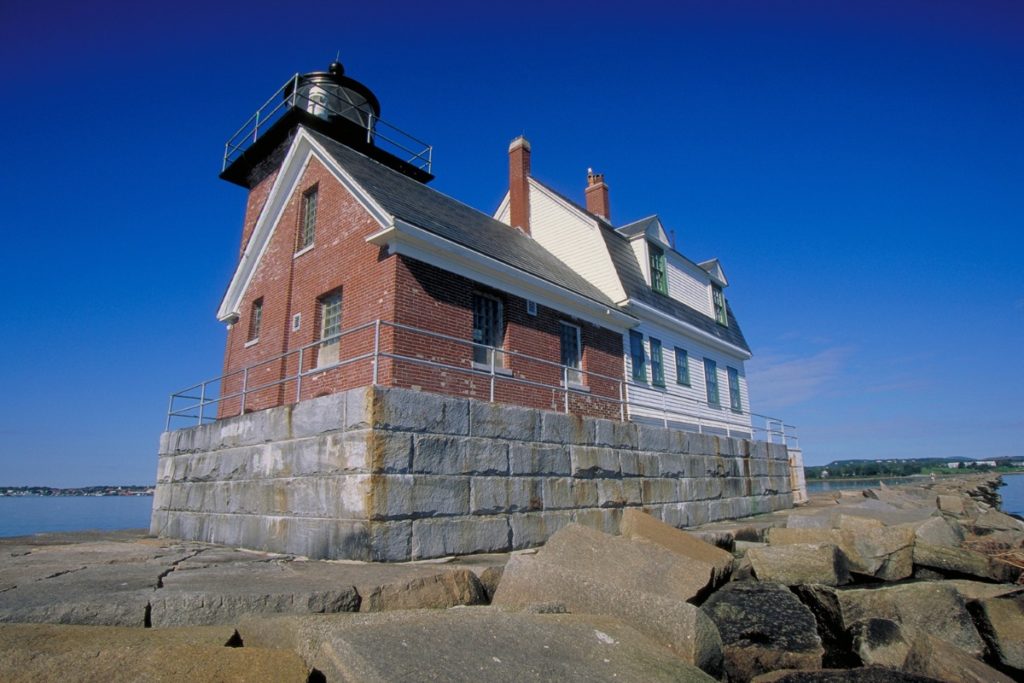 Since 2003, the lighthouse has been on the National Register of Historic Places. The U.S. Army Corps of Engineers owns the breakwater except for the portion that the tower rests on. The City of Rockland has owned the lighthouse since 1998 as part of the Maine Lights Program, which was intended to alleviate some of the Coast Guard’s responsibility of maintaining the historic structures.

The Friends of Rockland Harbor Lights chapter of the American Lighthouse Foundation signed a lease with the city in 2001 to take over the preservation and restoration of the tower and keeper’s house. This Friends chapter consists of concerned corporations, organizations, and individuals. However, the operation of the beacon and fog signal is maintained by the Coast Guard.

The restoration and preservation seemed a daunting task for the small group because the lighthouse had been uninhabited since 1965 when the keepers were removed. Practically no maintenance had been performed over that time, leaving the tower at the mercy of the weather. In the first five years, the Friends remediated hazardous materials, upgraded the electrical system, replaced the tower railing with reproduction railing, and cleaned up so that the public could visit.

Over the years, the group has restored the windows and installed authentic storm shutters too. Work continues with a plan to replace the glass block in the engine room windows with historically accurate reproduction storm shutters and windows. The goal is to maintain the historical accuracy of the lighthouse while adhering to security and safety requirements.

The Rockland Breakwater is one of those places you have to see if you live in Maine. Situated near the working harbor and the gated Samoset Resort the Breakwater has neat ocean views but no real beach. This is an engineering wonder, not a natural one, and is worth seeing. The Breakwater is crazy long and not for the timid.

The lighthouse itself is small but pretty and manned by great volunteers. There is a suggested donation for the tour, but no set fee. This is a great short outing for kids and a common first date for locals. Well worth a visit if you are in the area. 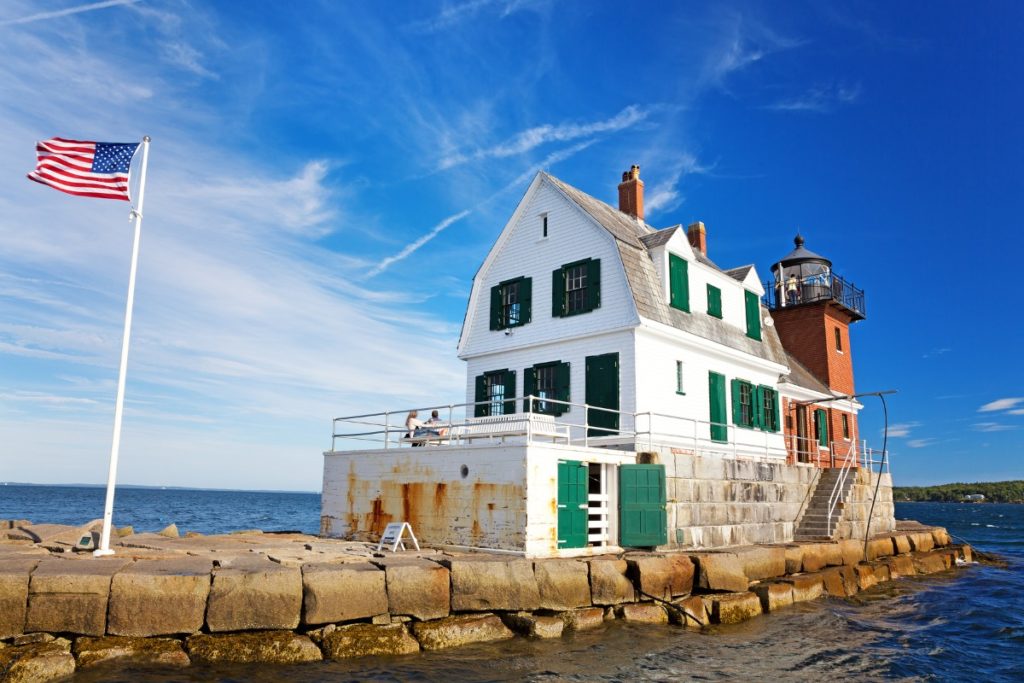 Best Places to Stay Near the Rockland Breakwater & Lighthouse

Just outside of Rockland, Glen Cove Inn & Suites is one of the closest and best places to stay near the Rockland breakwater and lighthouse. We have comfortable, affordable accommodations and serve a hot, deluxe breakfast every morning.

A few miles north, The Country Inn is another fantastic place to stay near the breakwater and lighthouse. On top of that, both of our bed and breakfasts are near many other lighthouses in the area that are worth seeing.

Start planning your lighthouse visit by checking our availability at Glen Cove and The Country Inn.