Explore the 10 Best Lighthouses in MidCoast Maine — Near Rockland, Camden and Rockport Maine

If you’re looking for “a lighthouse near me” during a MidCoast Maine vacation, you’re in the right place. Planning an adventure in the region is easy when you know where to find the best Maine lighthouses. Whether you want to learn about the history behind these landmarks or take photos as you explore Penobscot Bay, there are several lighthouses in and near Camden, Rockport, and Rockland. In fact, the best lighthouses in MidCoast Maine are among some of the most photographed across the globe.

As a coastal town on Penobscot Bay, Camden has a plethora of historical sites. Neighboring Mount Battie features a state park with views of the bay and Camden Harbor. Some of the best lighthouses in the region are also nearby.

Curtis Island Light is located in Camden Harbor on Curtis Island, which is mostly woods with a public town park and several footpaths. It was established in 1835, but the current 26-foot-tall white tower was built in 1896. This Camden Maine lighthouse is accompanied by a keeper’s house, toolshed and oil house. Fortunately, you can get a view of the harbor and lighthouse from the Curtis Island Overlook in Camden.

As one of the closest lighthouses near Camden Maine, Grindle Point Lighthouse was built in 1850 on the westernmost point of Islesboro. However, the current square brick tower and keeper’s house were established in 1874. The keeper’s house has become the Grindle Point Sailor’s Museum with nautical pictures, paintings, and antiques. Some ship models are on display, and there’s a gift shop too. You can take a ferry to the island to tour the museum and lighthouse in July and August.

A very short drive south of Camden, Rockport is another popular destination for coastal tourism. The town also has a prominent art community. In addition, it’s one of the prettiest areas in Maine, according to Forbes magazine, and the area lighthouses are part of that beauty.

The best Rockport Maine lighthouse to visit is the Indian Island Lighthouse. Located on Indian Island in Rockport Harbor, the lighthouse was established in 1850 but rebuilt in 1875. Before it was deactivated, the harbor was a major center for lime rock processing and shipbuilding. The 31-foot square white tower is accompanied by a keeper’s house, oil house and shed.

Located on Vinalhaven Island, Browns Head Lighthouse is located to the east of Rockport. Established in 1832, the brick lighthouse was rebuilt in 1857 and stands 20 feet. It marks the western entrance of the Fox Island Thoroughfare, which separates Vinalhaven Island and North Haven. As one of the last lighthouses to be automated in Maine, it’s still active.

Also, a popular tourist destination, the city of Rockland has a bustling harbor. It’s famous for its local seafood, especially lobster. However, many people are also attracted to Rockland for its scenery, which includes lighthouses.

This Rockland Maine lighthouse is a major attraction for the city. Established in 1902, Rockland Breakwater Lighthouse was built at the south end of the nearly 1-mile breakwater that protrudes into Rockland Harbor. It replaced the Jameson Point light station that was at the north end of the breakwater. Standing 25 feet, the square white tower continues to serve the U.S. Coast Guard. The lighthouse is open for tours during the summer as long as volunteers are available.

Built-in 1825 and rebuilt in 1852, Owls Head Lighthouse is another one of the most popular Rockland Maine lighthouses. The white brick tower stands 30 feet tall on the outskirts of the city in Owls Head State Park and is still active. The historic keeper’s house is located on the first floor of the lighthouse, and tours are available during the summer.

More of the Best Lighthouses in MidCoast Maine

Since lighthouses are a defining feature in Maine, there are many more to discover near Camden, Rockport, and Rockland. There are 65 Maine lighthouses along the state’s island-dotted coast. Below are some of the best ones that you can explore.

Fort Point Lighthouse is located at a station in Fort Point State Park. The initial tower was constructed in 1835 to guide boats into Bangor, which was a lumbering port at the time. The current square brick tower was erected in 1857 at 26 feet tall and is still active. It was named after the neighboring Fort Pownall, and the remains of the 18th-century fort are still there. You can explore the lighthouse grounds, which includes the keeper’s house, an oil house, a barn, and a pyramidal bell tower.

On Eagle Island, you can see Eagle Island Lighthouse via boat or from the southern point of Sylvester Cove, which is on Deer Island. As one of the best lighthouses in Maine, there’s an interesting history behind this stone tower and its pyramidal bell tower. The lighthouse was initially built in 1838 but was torn down and rebuilt in 1858. In the 1960s, the keeper’s house was razed and the bell removed. Since then, the Eagle Light Caretakers have restored the lighthouse and bell tower.

This Victorian lighthouse was built in 1907 on Isle au Haut, which is 6 miles east of Rockland. Sitting at Robinson Point, Isle au Haut Lighthouse was constructed slightly offshore and reaches 40 feet high. A catwalk connects the lighthouse to the keeper’s quarters. There’s also a boathouse, storage shed and oil house on the station grounds. While the best view of the lighthouse is from the water, you can explore the grounds.

Located on Greens Island in Vinalhaven, Heron Neck Lighthouse was built in 1854 to guide boats into the main port and Hurricane Sound. The 22-foot white cylindrical tower stands on the southernmost tip of the island on the Heron Neck peninsula on a rocky cliff. You get the best view of the tower via boat and scenic flight tours. The grounds also consist of a connected keeper’s house, fog signal, and oil house.

Where to Stay While Exploring Camden, Rockport, and Rockland Maine Lighthouses

Don’t forget to grab a bite to eat at one of these locally-owned restaurants in MidCoast Maine, and make plans to stay a night or two in the area.

While you investigate the best lighthouses in Maine, you’ll need a place to rest. With a central location to make traveling convenient, The Country Inn offers ideal accommodations at the best hotel near Maine lighthouses. You can book our cozy rooms and suites for family trips and romantic getaways. Our spa and massage services allow you to spoil yourself too.

Or if you’re looking for a place to stay closer to the water, our sister property has a walking trail with ocean views that you won’t want to miss! 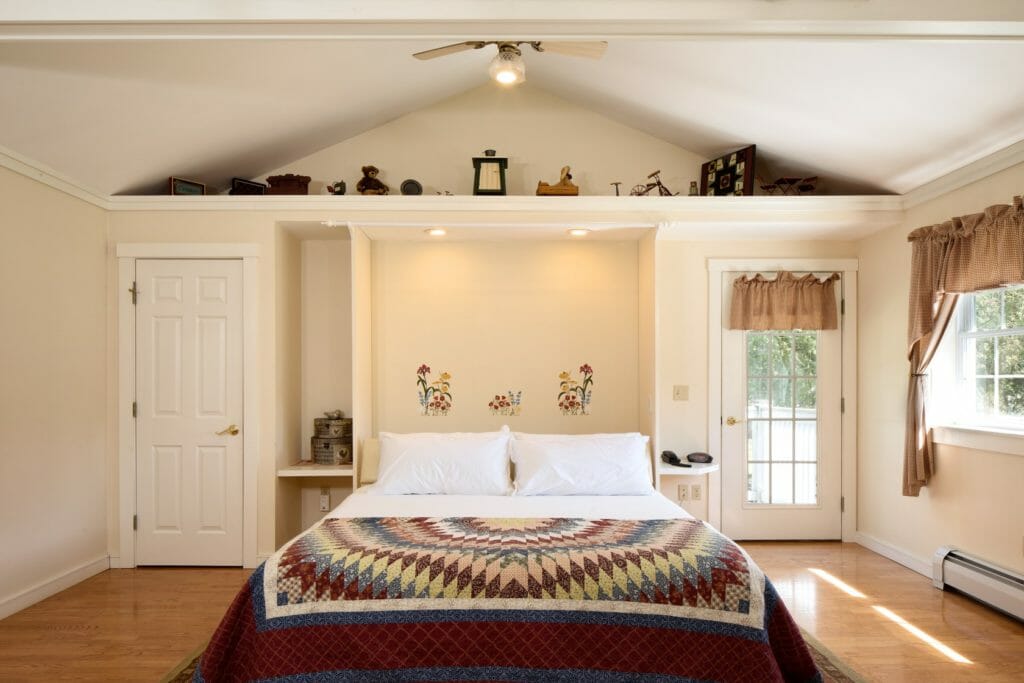